A guide to interpreting title plans

The boundaries of a property are important to owners. In many cases, there are no problems but, on occasion, they can be a source of dispute between neighbours which can result in disharmony, significant cost and stress. This note is intended to provide some guidance on this subject and, in particular, explain what is meant by the term “legal boundaries.”

The remainder of this note gives general guidance on how to identify legal boundaries, in particular using Land Register title plans. It does not constitute legal advice and it does not provide guidance on how to interpret plans where properties are recorded in the Sasine Register. The law in this area can be difficult.. If you need to establish the legal boundaries of your property precisely, or if there is a disagreement with a neighbour about them, you may wish to take independent legal advice.

The Land Register of Scotland includes a map of all registered properties known as the Cadastral Map. On this map the legal boundaries for one property can be seen in relation to all other registered titles.  When an extract of this map is taken, to enable an individual property to be viewed in isolation (rather than looking at the whole map), this is known as a title plan or Cadastral Map extract. 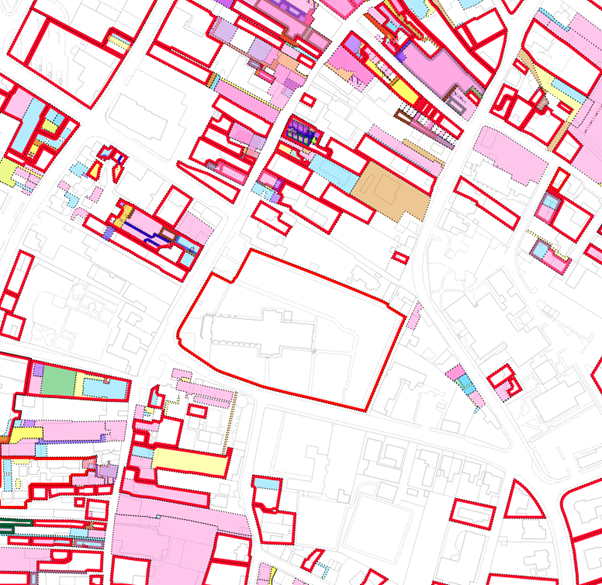 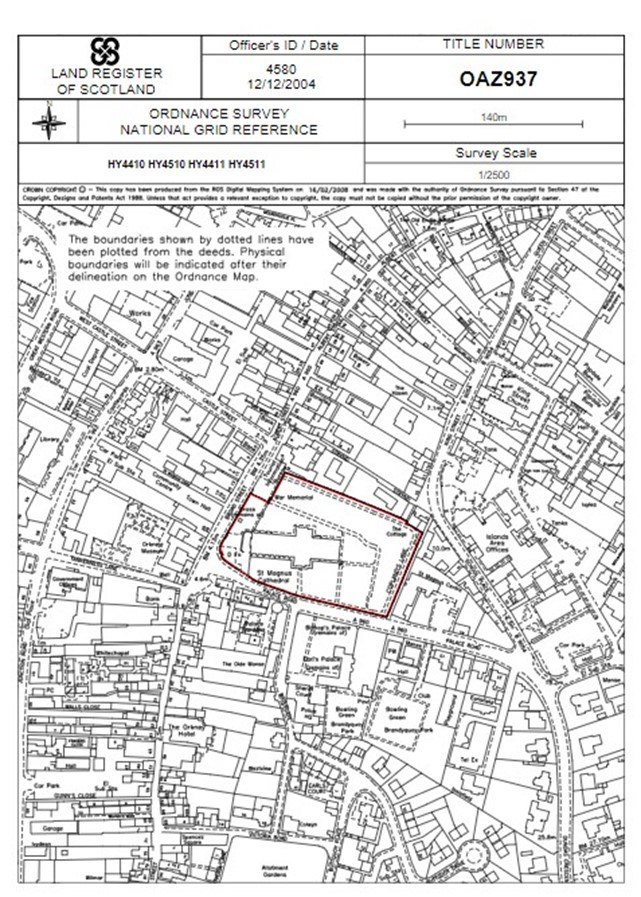 The Cadastral Map and the Ordnance Survey map

The Cadastral Map shows the legal boundaries of the property. To give those boundaries some real-world context however, it shows them against what is called a base map.

As with all other maps, the Ordnance Map has limitations and involves subjectivity when describing and representing elements in the real world.

Every map has a scale, and this allows maps to show real-world objects to a different size in real life. Scale is usually written in the format “1:2500”. This means 1 unit of measurement on the map represents 2500 of those units in the real world e.g. 1cm on the map equals 2,500 cm (or 25m).

How a real-world feature is represented on the Ordnance Map is dependent on the degree of depiction used at that map scale. Each map scale applies different rules, with features being represented in most detail on the largest scale (1:1250). In simple terms, the smaller the scale, the less likely small details, such as a staggered fence or a curve in a wall, will be shown on the Ordnance Map.

The examples below seek to illustrate.

You can clearly see that there are five separate and distinct buildings. This is because each of the gaps between the buildings are at least 1.0m and meet the minimal criteria to be shown at that scale. Also note the shape of Building 3 (at point A) where the building ‘juts’ out by about 0.4m. 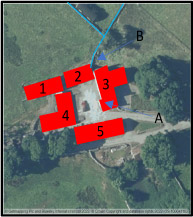 Observe how the same scene now looks different.  Buildings 2 and 3 from example 1 now appear like a single building. The jut which was shown in example 1 is also not shown here because it is too small to show on a map of this scale. In the real world, of course, the buildings remain separate and the front of building 2 still juts out. 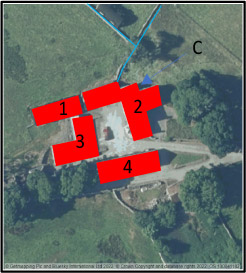 At this scale the degree of generalisation is even greater. It looks like just two buildings. At 1:10000 scale for buildings to be shown separately the gap between them needs to be 5m or more on the ground. 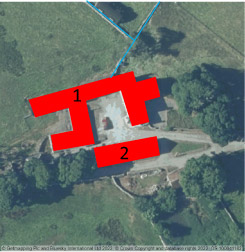 More detail on OS survey scales is available on their website

As set out above sometimes a legal boundary will be marked by a physical feature and sometimes not. A further possibility is where two or more physical feature exists very close to one another (such as a fence and a hedge). These are sometimes known as parallel features. It can be difficult (and confusing) to try and show all of those features on the Cadastral Map so where this occurs the OS will choose one of the features and show that one only. Further information on how that choice is made is available on the OS website. But for the purposes of this guidance, it is sufficient to know that a choice is made, and one feature is shown.

The following example is fairly typical and shows three features potentially defining a property boundary - an old metal fence, a hedge, and a wooden fence. A surveyor visiting this site would have no knowledge of the legal boundary and may pick any of the three as the physical feature to be shown on the map. An operator capturing data from aerial, satellite or drone imagery would have no knowledge of the metal fence as it is obscured by the hedge. In this particular example, it is the metal fence that defines the title boundary as shown on title plan: 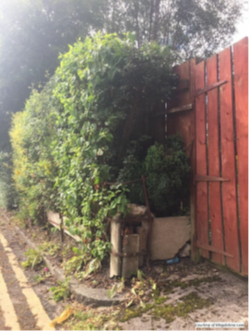 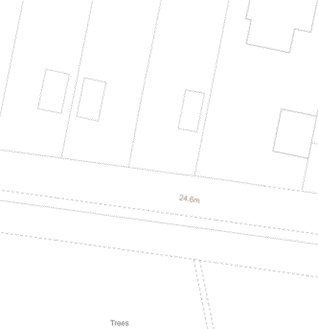 Scale and the Land Register

As noted above the Cadastral Map (the Land Register map) shows legal boundaries against the backdrop of the Ordnance Map. But, as we have also seen above, the Ordnance Map has certain limitations which flow from limitations of scale. This presents a difficulty because legal boundaries do not suffer from problems of scale. They are absolute and, in theory at least, the legal boundary is a line of infinitesimal thickness capable of being captured with absolute accuracy.

This difficulty is addressed, at least in part, by section 65(3) of the Land Registration etc. (Scotland) Act which provides that the Cadastral Map is not inaccurate where it shows something incorrectly by virtue of an inexactness in the Ordnance Map as long as it is within the published tolerances for the scale. In other words, the Cadastral Map cannot be more accurate than the Ordnance Map.

A title plan will show the boundaries of a single property. The simplest title plans are those which show the legal boundary of the property as a red edge, such as the example below. 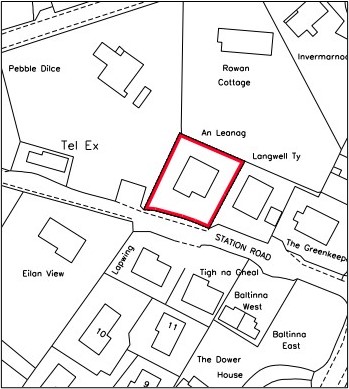 In the example above the property is shown and described as being ‘edged red’. The thickness of the red edge should be discounted. The legal boundary shown by the red edge coincides with the physical features shown by black lines on the Ordnance Map.

If you were to visit this property you could be confident that the physical features marked the legal boundary. though care would have to be taken that they had not been moved or rebuilt since the area was last surveyed.

Where this level of detail was given in the historic deeds for the property in question the Keeper will show it on the Land Register. That will be done by way of a note in the Property Section of the Land Register title sheet, such as in the following example.

In this example, the legal boundaries are shown by a red edge. The blue letters and arrows on the title plan, in conjunction with the note in the Property Section, give more information about the boundary. 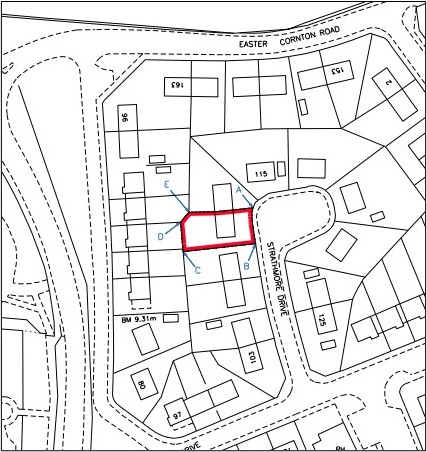 Variations on this note, for example referring the reader to a previously recorded deed, may be used depending on the complexity of the boundary position.

Where the Land Register does not provide further boundary references, that is because no further detail was available in the historic deeds. In such cases, examination of neighbouring titles may be helpful, but ultimately it may be necessary to consult a solicitor to advise on the various legal presumptions that apply where titles are silent on the precise position of a mutual boundary.

Sometimes there will be additional references on the title plan, showing the extent of rights which relate to the land in question. The most common example of such a right is a right of access (known as a servitude). 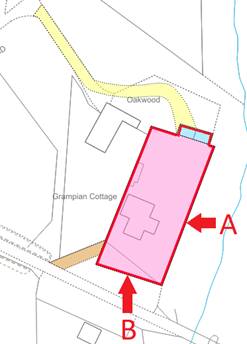 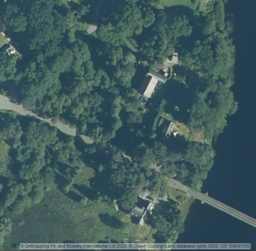 The other references on this title are as follows:

Get deeds and title plans

You can order title documents and title plans from our register via our order deeds service.

The purpose of this guidance is to seek to explain some of the basic principles which underpin the mapping of boundaries in the Land Register and how to interpret that mapping. It is hoped that this will result in a better understanding of legal boundaries and the role of the Land Register. However, it should be kept in mind that determination of legal boundaries can be influenced by a range of factors beyond what is shown on the cadastral map and the base map. The underlying deeds and the law of prescription are also important factors, as are factual considerations such as the nature and extent of possession of an area of land. For specific advice on a particular issue, you should consult a solicitor who is knowledgeable in conveyancing and Scots property law.