This guidance covers the colour references we use when mapping cadastral units on the cadastral map.

These references are used to clarify and make sure the mapping of the registered plot of land, is accurate as much as possible. It also shows the rights and burdens that are relevant to the plot, where appropriate.

We try to follow the mapping conventions references where possible, however, due to the bespoke nature of conveyancing and complexity of some titles, this is not always possible.

The references in the table are available to plans officers to create the cadastral unit and how the colours are presented in the title sheets.

The colours on the cadastral map that we use, may look like other colours when printed. For example, brown may look like the colour orange.

On the cadastral map, you are likely to see references for:

The most common reference you are likely to see on a cadastral unit is the red edge. Figure 1 shows the extent of registered land or in the case of a flatted property, it will define the tenement steading cadastral unit that represent the tenement including land next to it. 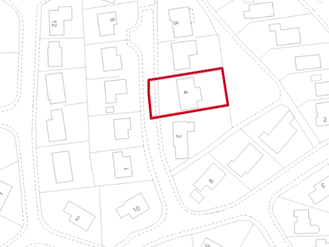 Figure 1: A cadastral map that shows a red edge around the unit on a title plan.

The red edging on a title plan shows you the registered land. It often follows boundary features shown on the Ordnance Survey (OS) map such as:

Even though a legal boundary follows these OS features, it might not be obvious exactly where the legal boundary is. For example, it might run through the middle of a hedge or to one side of it.

When we prepare a title plan, we try to show the legal boundaries as accurately as we can. However, we are limited by the scale and accuracy of the OS map. Sometimes the title deeds and other information we are given do not show the true position of a boundary.

Where you see red edging, the black solid or dashed line shows the feature where edging has been used. In most cases this will be to the outer edge of the red, but in some cases, this may be on the inner edge. This looks like the red edge being flipped outside of the plot of land. An example is shown in figure 2.

We no longer use external edges on our title plans, however registered titles with external edging will still display on title plans, until an update to the mapping of the cadastral unit is completed. 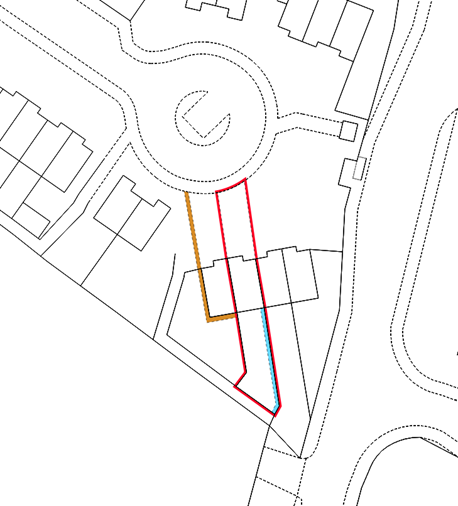 Figure 2: A cadastral map that shows external red edging to the boundary of the subjects. The brown and blue tints show servitude and burden.

We may use tints or hatchings to represent the extent of the subjects, shown in figure 3. The exact references that are used depend on the circumstances of the specific registration. 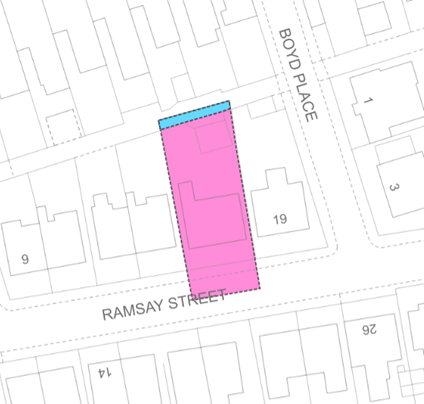 Figure 3: A cadastral map which shows the extent of the subjects tinted pink and blue with a burden over the area tinted blue.

As well as showing the position and extent of a registered plot of land, the cadastral map will reference:

This is used where certain encumbrances are affected. For example, where a neighbour may have access rights or where areas of ground have been leased. To show the encumbrance on the cadastral map, a plans reference will be shown for that encumbrance. An example is shown in figure 3 and figure 4. 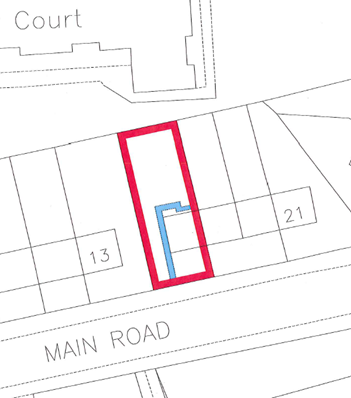 Figure 4: A cadastral map that shows a red edge, with a burden right of access over the area in blue tints.

There are common colours of tints that are used in the title plans to make sure they are easy and clear to identify. The guidelines we use are shown in the table.

We will try where possible to standardise the use of references, for example use: 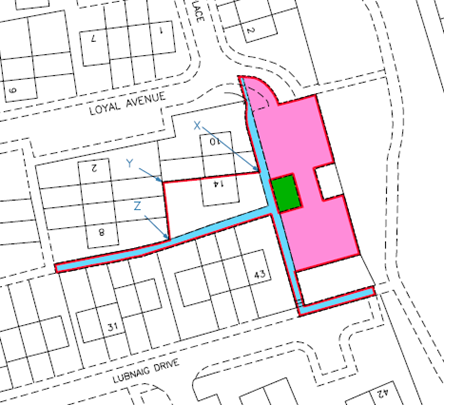 Figure 5: A cadastral map that shows subjects edged red, with the part tinted in green and external red edge not forming part of the subjects. Pink and blue tints are burdens references, boundary labels are shown labelled X, Y, Z.

Illustrations of how different tints and edges can be used to construct cadastral units is shown in Figure 5 and Figure 6. 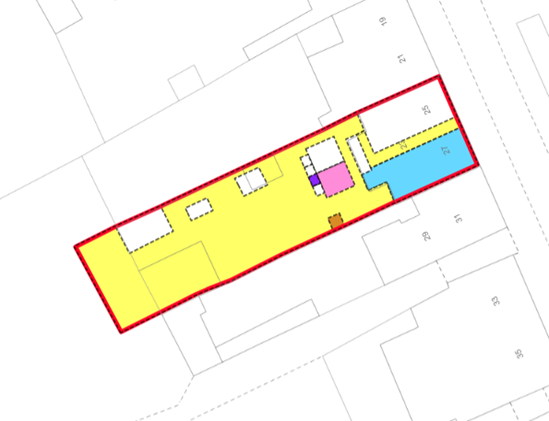 Figure 6: A cadastral map of a flatted property with the tenement steading edged in red, the flat tinted in blue and pertinents in pink, brown, mauve, and yellow tints.

There are some exceptions to these guidelines, which are specific styles that are set up for certain developments that reflect Deed of Conditions (DOC) references.

Other coloured edges and numbers

We use different coloured edging and number references for large  complex titles or parent titles instead of using tints.

Edging and numbering in green

We use green edges and numbers to reference those parts of a cadastral unit where the whole right, title and interest in those parts were removed and transferred to become a separate cadastral unit. For example, when a house plot is removed from a property developer’s title. An example of this is shown in figure 7.

We no longer use this style for new developments. 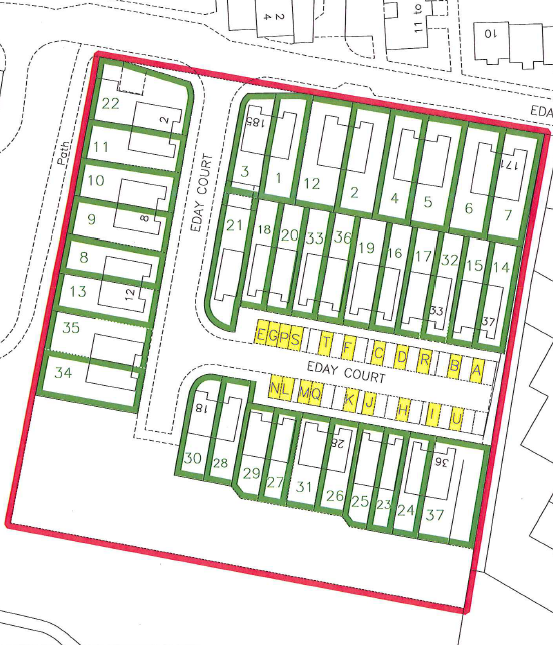 Figure 7: A cadastral map of a housing development title extent that has red edging, with properties sold out edged and numbered in green. The yellow tint and numbering are burdens reference.

Developments that are ongoing with this type of mapping may continue with this style for future removals. The style that we use for all new developments is shown in figure 8. 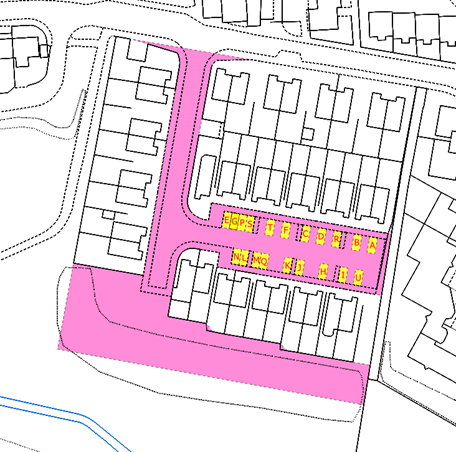 Figure 8: A cadastral map of a housing development in pink and yellow tints. The areas in yellow tints and red lettering show burdens reference.

Edging and numbering in blue

We use blue edges and numbers in: 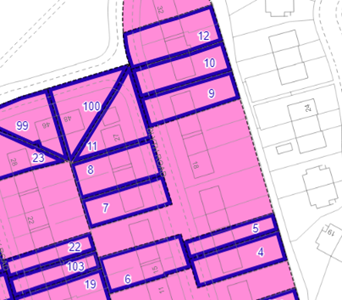 Figure 9: A cadastral map of a parent title extent, with pink tints that show parts previously feuded out and blue edging and numbers.

There are rare instances of blue edging and numbering. For example, areas affected by DOC on certain Glasgow district council cases where additional pro indiviso land is not affected by the conditions.

Edging and numbering in yellow

We use yellow edging and numbering to reference the part of a cadastral unit that is a registered or a recorded lease. An example is shown in figure 10. 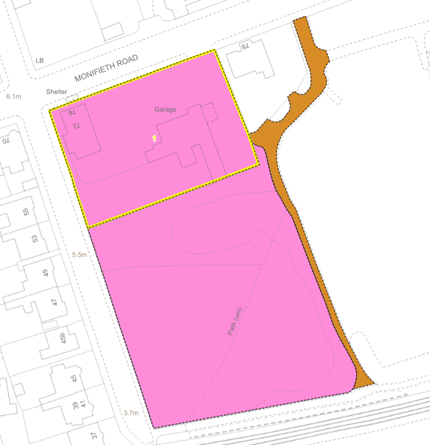 Figure 10: A cadastral map that shows a cadastral unit tinted pink, with the part that is leased has a yellow edging and number. The area in brown tint is a servitude.

Edging and numbering in brown or mauve

We use brown or mauve edging and numbering to reference a part of a cadastral unit that is affected by any deed that is not a lease, for example:

Edging and numbering in red

We use red edging and numbering when the area being registered, is made up of many portions. These need separate references and using other coloured edgings would be cumbersome or unclear.

Other edging and numbering

In a complex title we sometimes use an edge to free up a colour tint for another use. For example, using a blue edge instead of a blue tint for showing the solum of a building in complex titles that has multiple references. An example of this is shown in figure 11. 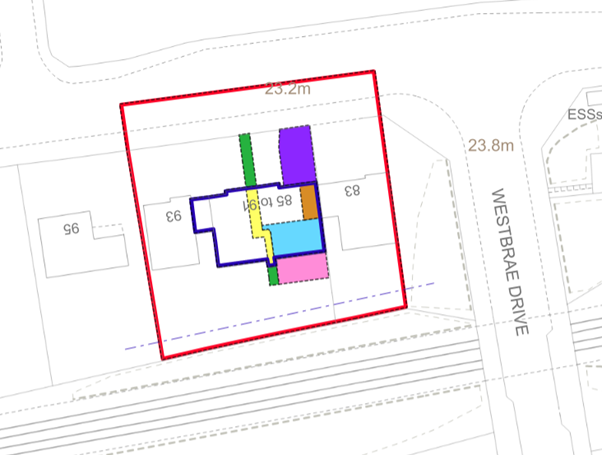 Figure 11: A cadastral map of a solum of the building edged in blue, the extent of the flat in blue tint. Other pertinents, rights, and burdens are referenced in red edging, pink, brown, green, mauve and yellow tints, and a blue broken line.

We use numbers and letters for different sized areas on a cadastral map. These include:

We use coloured broken lines to show:

An example of a cadastral unit with various lines is shown in figure 12. 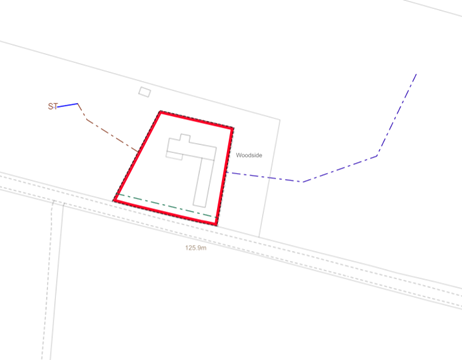 Figure 12: An example of subjects edged red, with a servitude over the blue and brown broken lines and a burden over the green broken line. Septic tank has been labelled 'ST'.

We use hatching to increase the number of references available when mapping a complex title. There are no specific guidelines to the colour used because it is used to make the areas clearer.

A small number of historical titles have cross-hatching, which we no longer use as reference on a title plan.

A title sheet will never include a plans reference that refers to a non-coloured section of the cadastral map.

We no longer describe boundary references descriptions on the cadastral map for new registrations in the deeds.  There are many older titles registered under the previous land registration legislation that may show these as lettered with:

Blue arrows and letters which are also called labels, are still used on the cadastral map where the deeds show:

We describe a boundary in the deed as following the centre line of a mutual gable wall, or the outer face of a hedge where the black arrow is:

Visualisation of the cadastral map

The cadastral map shows the total registered geospatial data, except for supplementary data in individual title sheets. For complicated titles, showing this information can be difficult to show on the cadastral map.

For complicated titles, where the volume of references, including the subjects or individual references are unclear and hard to identify, references may be transferred onto additional views or plans to the cadastral map. These views of the cadastral map are shown as supplementary data plan or title plan views as separate documents from the title plan.

We use a sequential number form which is the title number then a dash and a number. For example, MID1-1. Supplementary data can also be presented in this same way and is shown within the title sheet.